Libby
I found Killian drunk and sprawled out on my lawn like some lost prince. With the face of a god and the arrogance to match, the pest won’t leave. Sexy, charming, and just a little bit dirty, he’s slowly wearing me down, making me crave more.
He could be mine if I dare to claim him. Problem is, the world thinks he’s theirs. How do you keep an idol when everyone is intent on taking him away?

Killian
As lead singer for the biggest rock band in the world, I lived a life of dreams. It all fell apart with one fateful decision. Now everything is in shambles.
Until Liberty. She’s grouchy, a recluse—and kind of cute. Scratch that. When I get my hands on her, she is scorching hot and more addictive than all the fans who’ve screamed my name.
The world is clamoring for me to get back on stage, but I’m not willing to leave her. I’ve got to find a way to coax the hermit from her shell and keep her with me. Because, with Libby, everything has changed. Everything.

“You’re pretty.”
He says it so matter of fact. I snort. “You sound surprised.”
Killian Leans in just a little bit. “Truth? I am. You’ve been scowling at me so much… Ah, there it is again. Glaring hate-fire at me.” The calloused tip of his finger traces the top of my cheek, and my lower belly clenches in shock. Hi voice grown thoughtful. “But when you smile? You kind of glow.”

The moment Kristen Callihan publishes a book, I’m on it. Oh, I’m so on it like a cat in heat! Only I was not with Idol. I did get it the moment it was released but it has been sitting on my Kindle until today. And I’m regretting not reading it immediately. I love rock star romances but sometimes they get too much for me and so that was what I was expecting. PLEASE SLAP ME WITH A FISH. Kristen Callihan never disappoints, ever.

“Babe, if I’ve learned anything about opportunity, it’s that you make it happen. Fear will only hold you back. You can have the world. Just reach for it.”
“I don’t need the world,” she whispers.
“What do you need?” I ask just as softly.
Her hands slide up to my neck, her lips nuzzling my jaw. “You.” 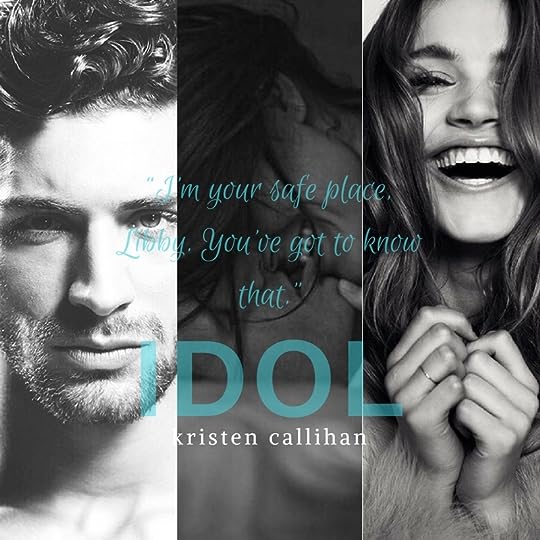 Liberty Bell- Yes, that is her name – a young women who lives alone in her grandmother’s house in North Carolina. After the death of her parents, she moved back to her grams house. Liberty is kind of a hermit, she keeps to herself and rarely speaks to anyone. When one night, she finds a bum on her lawn, laying in his vomit, passed out, she decides to go out there and put the hose to good use. And the bumon her lawn ends up being Killian James.

Killian James is the lead singer and guitarist of the famous rock band Kill John. After the members of Kill Johndecides to take a break, Killian ends up in North Carolina, where he rents a house. He has lost all will to make new music. One night, he ends up drinking and driving, crashing into someone’s lawn and passing out. After being attacked by Liberty, who he names Elly May in his drunken state, she ends up taking care of him for the night. Only come morning, they find out they’re neighbours.

For Killian it’s refreshing that Liberty doesn’t know who he is. To her he is just her nosy, handsome, annoying neighbour. As they spend time together, their friendship starts to develop into something stronger. But Liberty knows that the day will come when Killian has to return to his old life. And here lies the question, what will happen to Libby and Killian? Will he leave her all alone or will he take her with him?

A smile pulls at my lips. “You want me to stay, Lib?”
God please let me stay. I’m so damn cold. And my bed is empty.
“Yeah,” she whispers.

This book was so addictive, I finished it in one sitting. I always fall in love with Kristen’s characters and her way of writing and the only regret I have is starting it so late.

“Oh, God, you have such a cute little pussy.”
Her head wrenches up, and she glares at me down the length of her body. “Do not call it cute.”
“But it is,” I croon, placing a soft kiss on her pink bud, loving the way it jumps under my touch. I hum in satisfaction. “So fucking cute.”