Three estranged sisters inherit their late father’s failing hockey franchise and are forced to confront a man’s world, their family’s demons, and the battle-hardened ice warriors skating into their hearts.

Harper Chase has just become the most powerful woman in the NHL after the death of her father Clifford Chase, maverick owner of the Chicago Rebels. But the team is a hot mess—underfunded, overweight, and close to tapping out of the league. Hell-bent on turning the luckless franchise around, Harper won’t let anything stand in her way. Not her gender, not her sisters, and especially not a veteran player with an attitude problem and a smoldering gaze designed to melt her ice-compacted defenses.

Veteran center Remy “Jinx” DuPre is on the downside of a career that’s seen him win big sponsorships, fans’ hearts, and more than a few notches on his stick. Only one goal has eluded him: the Stanley Cup. Sure, he’s been labeled as the unluckiest guy in the league, but with his recent streak of good play, he knows this is his year. So why the hell is he being shunted off to a failing hockey franchise run by a ball-buster in heels? And is she seriously expecting him to lead her band of misfit losers to a coveted spot in the playoffs?
He’d have a better chance of leading Harper on a merry skate to his bed…

Those blue pools still wavered between her eyes and mouth. “I’m gonna kiss you now, minou.”
She might have nodded. She might have blinked. One for yes, two for hell yeah.

I’ve read some of the books in the Hot in Chicago series but I can definitely say I loved this book more and can’t wait for Isobel and Vadim’s story. This one took me with surprise if I should be honest. I wasn’t expecting to get sucked in from the first page until the end. It was SO GOOD. I loved every second of it and I didn’t want it to end. But it did. And now I have to wait sooo loooong for the next book. WHY KATE MEADER? 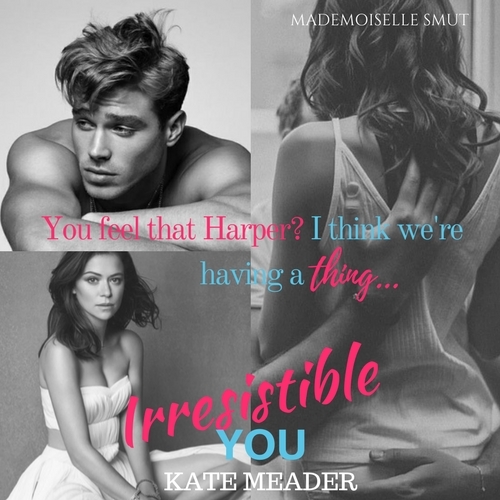 After losing her father, Harper Chase and her two estranged sisters inherits the Chicago Rebels. A hockey team with weak, troubled members. Harper has always loved hockey, not playing the sport but she has always wanted to work with hockey players. Her father had never really thought Harper could handle it, now is her chance to prove them wrong.
To fix the team, Remy DuPre or Jinx, has been traded out of Boston and to the Chicago Rebels. And he is not happy about it. His goal is to win the Stanley Cup and he knows that won’t happen playing for the Rebels. Remy wants to make a deal with Harper, a deal that will mostly benefit himself but also do some good for the team, he will help the team but she’ll have to trade him. She agrees in desperation for her team and her career.

Harper is different from the usual girls Remy goes for but she also the one woman who makes him feel things he does not wish to feel. But she’s still his boss and whatever attraction they feel for each other cannot develop into something more. But after one ‘accidental’ kiss, things start to heat up between Remy and Harper, and they both have to fight whatever is happening between them for the sake of their careers. For Harper, it is everything to own the Chicago Rebels and for Remy, the cup is his dream and goal. So will they give in and risk it all and just do it on the ice? Or will they keep fighting it for the sake of their careers?

Harper and Remy’s relationship was absolutely awesome! I adored them. They made me laugh out loud and had me buzzing in my seat. Not only did I love the main characters, but I loved Harpers sisters, Isobel and Violet, and Remy’s teammates and cannot wait for the coming books in this series.
If you love hockey romances this one is for you!

Staring into Harper’s dancing green eyes, he spoke from the depths of the heart that belonged to this incredible woman. “But mostly, I skate for her.”

Irresistible You (Chicago Rebels #1) By Kate Meader is expected to be published August 14th 2017.