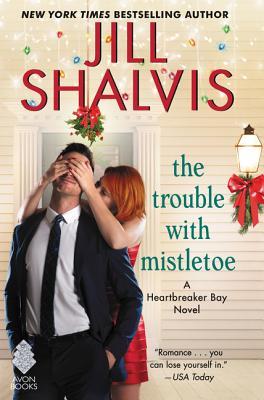 If she has her way …

Willa Davis is wrangling puppies when Keane Winters stalks into her pet shop with frustration in his chocolate-brown eyes and a pink bedazzled cat carrier in his hand. He needs a kitty sitter, stat. But the last thing Willa needs is to rescue a guy who doesn’t even remember her …

He’ll get nothing but coal in his stocking.

Saddled with his great-aunt’s Feline from Hell, Keane is desperate to leave her in someone else’s capable hands. But in spite of the fact that he’s sure he’s never seen the drop-dead-gorgeous pet shop owner before, she seems to be mad at him …

Unless he tempers “naughty” with a special kind of nice …

Willa can’t deny that Keane’s changed since high school: he’s less arrogant, for one thing—but can she trust him not to break her heart again? It’s time to throw a coin in the fountain, make a Christmas wish—and let the mistletoe do its work … 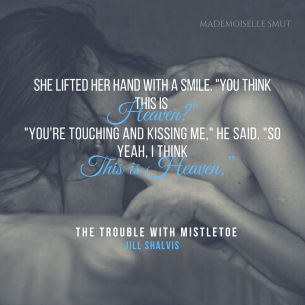 This was my first book by Jill Shalvis and I can say with all honesty, she’s now on my top ten of favourite authors. This was everything I was looking for. It was funny, cute, sexy and more!

Willa Davis is the owner of the South Bark Mutt. She spends most of her time there caring for animals. She loves all her client’s and their pets, just as much as she loves her group of friends. She’s kind and caring to everyone around her, but when Keane comes knocking, she’s anything but loving. In high school, Willa had asked Keane to the dance and was stood up by the popular jock and that had cut deep. And now here he was. Looking all kinds of sexy.

Keane Winters doesn’t remember Willa. So when he stalks to South Bark Mutt, begging to board his great-aunt’s cat for the day, he is met with Willa’s attitude, and he’s left confused. He doesn’t understand why Willa seems irritated by him. After more meetings with the feisty redhead who cares so much for her friends and animals, he wants more. And he’s pretty sure she wants more too. But Keane doesn’t get attached while Willa gets attached easily.

“He shook his head in surprise. “I don’t get attached.”
She looked at him. “Ever?”
“There’s no place for it in my world.”

Willa and Keane gets closer thanks to his aunt’s cat, Petunia. As their friendship deepens, conversations become more flirtatious and feelings develop. But Keane has attachment issues and Willa doesn’t want to get hurt by Keane again, which causes confusion about their feelings to one another. Will they fight through their issues? Or will they both let go of each other?

“Listen to me, Willa, because I want to make something perfectly clear here.” He opened his eyes and held hers prisoner. “You’re the most unforgettable person I’ve ever met.”

This is one of those stories that will stay with me. It consumed me entirely. When I was done with the book, I looked around and was disappointed it wasn’t snowing outside and there were no christmas lights begging for attention and I can’t wait to re-read this gem on christmas.

“Then he lowered his head and brushed her mouth with his. And then—to torture them both—again.
Moaning, she dropped the mistletoe and tugged her hand free to grip the front of his shirt with two fists. She was still holding tight when he lifted his head.
“It’s the damn mistletoe,” she whispered.
He let out a low laugh. “Babe, it’s not the mistletoe”

This is a must read. And now especially, before the movie comes out in December. So turn off the lights, light up some candles and get lost in this sweet, cozy love story.