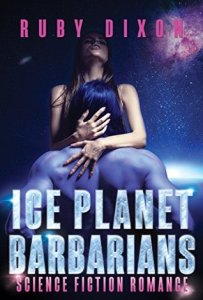 You’d think being abducted by aliens would be the worst thing that could happen to me. And you’d be wrong. Because now, the aliens are having ship trouble, and they’ve left their cargo of human women – including me – on an ice planet. And the only native inhabitant I’ve met? He’s big, horned, blue, and really, really has a thing for me…

I was NOT expecting that. At all.

After being in a book funk for a whole week, I was browsing GR, trying to find something different to read and stumbled on this series. Now, Ice Planet Barbarians has popped up a few times on my recommended, and I’ve seen my fellow GR friends rate this series 4+ ratings. Still, I’d always been skeptical about reading it. But I thought, I’ve already read so many disappointing books for the past few days, one more won’t ruin my reading slump.

Oh, how wrong I was! I finished this bad boy in one sitting.

The beginning of the book we see how Georgie wakes up on an alien ship with other human women. They have been abducted by these creatures to then be auctioned off on another planet. She confused and scared but understood quite quickly not to mess with the aliens. When turbulence hits the ship, the aliens are forced to relieve cargo on this Ice Planet, the cargo being these women.

Georgie becomes the leader of this group of humans and is voted to go search this planet, to find food and water. And that is when she meets Vektal. Vektal knows Georgie is his mate the moment he breathes her scent. The way he greeted her the first time was just WOW. If I read that in a contemporary romance book, I’d be weirded out. I loved how Valkat treated Georgie, and the communication between these two was hilarious to read.

I think everybody should give this book a chance, try something different. You never know, you might just fall in love with these aliens as I did.

Why not 5 stars?
The only reason I didn’t rate it a five is because of the length of the book. I would have like maybe a hundred more pages to read.

Now it’s time to dive into the next book!