Bad day? Try mine on for size.
Rogue slavers have landed on the ice planet and captured the tribe. The only ones not snatched? Me, a walking human motormouth with no skill except that of incoherent babbling, and Warrek, who’s as silent as he is attractive. Two more unlikely people have 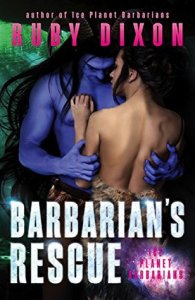 never been paired together.
And now we’re supposed to form a rescue team.
Saving the others is either going to bring us closer together – or drive us completely apart. I’m pretty sure the feelings I’m having for my alien companion are as unrequited as they are inappropriate, but since we aren’t going to make it out alive, what harm is one teeny, tiny kiss?

Who knew that one kiss could change everything?

Warrek was such a sweetheart with a kind soul, and Summer was just the right woman for him.

Summer is one of the females that were sold as a slave to Bek along with the other women. She’s the talker of the group, and her rambling was hilarious. Warrek is the complete opposite of her, he’s quiet and ‘shy.’ He teaches the kits to hunt and has given up on ever finding his mate.

“The women here are treated incredibly well by their mates. And they’re all ridiculously happy. It’s hard not to want that. And the guys are hot. Like seven-foot-tall, muscular as all get out, flowing dark hair, every female’s fantasy kind of hot.”

This book picks up where we left it in the previous book. Summer and Warrek are out collecting fruit for the tribe when the Tranquil Lady is seen arriving on the planet again. Summer and Warrek watch helplessly as unfamiliar aliens- slavers -drug and abduct their people and holds them captive on the ship. (view spoiler)

Now Summer and Warrek need to rescue their family and to do that they need to work together. Their chemistry was off the charts, and I loved that Warrek was quiet with the others but talked comfortably with Summer, and he was sexily demanding with her as well. And when Summer gave Warrek an anatomy lesson of the human body; fire!

“If we survive this night, I am claiming you as my pleasure-mate.”
I gasp. “You—you what? You are?”
He nods. “You will show me this kiss with tongue, and I will take you to my furs and make you mine. I have decided.”
“Decided?” I echo, stunned. I can still feel the light brush of his lips against mine.
“Yes. You are my opponent, and I am going to take control of your board.”
That’s the sexiest, most bizarre thing I’ve ever heard.