Carrie Anderson—truth seeker, storyteller, journalist-at-large—is bad at social media and great at getting herself into trouble.
When she’s fired from her dream job for an ill-advised tweet, she has no other choice but 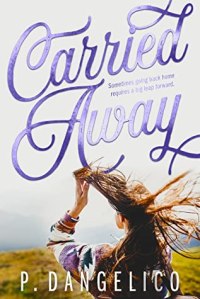 to return to the town where she grew up with her head hung low.
It’s temporary after all. She can work at her family’s bed and breakfast, fix her finances, and get back to her life and home in Los Angeles.
There’s only one not-so-little problem…the grouchy ex-NHL star making her rethink what home means.

Jake Turner—great at hockey, bad at people—is not a happy man.
Haunted by his past, all he wants is to disappear into obscurity, to get away from the scrutiny of the press he’s been under since going pro at nineteen. But when the press finds him, disappearing is no longer an option.
Worse yet, the same journalist he’s trying to avoid is making him reconsider whether being forgotten is what he really wants.

P. Dangelico is one of my favorite authors. Her writing is spectacular; the words consume the reader, and it’s hard to put her books down. This book was no different, and when the cover was revealed, I knew I would love this book, just from that gorgeous cover!

Carrie Anderson has been fired from her dream job and therefore travels back home to her hometown to help her dad and nan with the family bed and breakfast. Moving home does not go as planned when she ends up on the side of the road, her car drowned in bunches of snow. After almost freezing to death, a man rescues her, however her saviour turns out to be the biggest jerk.

Jake Turner wants to be left alone. An ex-NFL superstar, now hated by the world, has escaped to Lake Placid to disappear. And then the reporter appears, Carrie Anderson. She’s everything he doesn’t need right now, or so he thinks.

I absolutely loved Jake and Carrie. They were amazing characters and their chemistry was fire; especially with Jake being such a grouch. If you’re looking to read a sweet, small-town romance with the perfect dose of steam, this one is for you.