The enemy of my enemy is my friend… 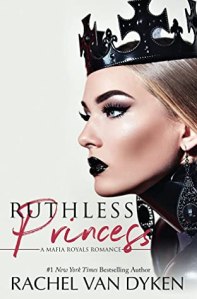 I never thought my father would ask this of me, to become the second generation at Eagle Elite University, to rule with an iron fist, and to take care of anyone who gets in our way.
But ever since the incident.
Ever since Him.
There’s been a war in our little clique.
After all, a house divided cannot stand.
He’s the problem, not me.
He used to kiss me like I was his oxygen.
Now he looks at me like I’m his poison.
But we both drank it, again and again, never believing there would be a day when our love would start a war.
And our friendship would shatter into a million pieces.
Then again, the worst thing you could do in the mafia is hang on to hope that your life will be normal.
The second worse thing?
Fall in love with your best friend.
Enemy.
And heir to the Nicolasi throne.

Who ran the world? The Five Families. The Chicago mafia. Crime syndicate. Whatever you wanted to call it. We were it. It… owned us.

First of all, let me tell you—I ugly cried almost throughout this book.

I BR this with the awesome Rachel (LoverofTBR), and we had an exceptional time, getting our souls shattered. We were speculating about two certain characters throughout this book, and those two stole our hearts. This book brought a lot of explosions, and we were crying together, laughing together—we had a fucking blast!

They wouldn’t approve. It was one of their many rules. And only they knew the real reason they didn’t want any of us together.

If you’ve read Royal Bully, you know how Asher was assigned to break the love between Junior and Serena. He had to make them hate each other to save both their lives because in the Family when rules are broken, the penalty is death.

Now, Serena Abandonato, daughter of Nixon and Trace, the new Queen of Elite University, heir to the Abandonato family and Junior Nicolasi, the only son to Phoenix and Bee, King of Elite University, heir to the Nicolasi family, hates each other. The two heirs of the Family, once so in love, now only spit hate at each other. But hatred is just as strong of an emotion that love is. And what love couldn’t do for them, hate will.

“One day… I’m going to kill you.” He said it like a promise.
And I answered in truth. “You can’t kill what’s already dead.”
For a brief moment, I felt his fingertips graze mine.

Junior was such a robust character. He was the pure cold and violent mafia man, but at the same time, he showed genuine emotions and loyalty to the ones he loved. Serena was just the same; she took no shit from anyone, gave as good as she got, loyal to the core; she was the real Queen.But if we look at them together, their hate was just as strong as their love. They were indestructible.

While this book is filled with angst and will break your heart, don’t underestimate RVD’s writing power because the strength of this family is magnificent in every way. You will cry with them but also laugh with them during their family dinners.

Breaker just rolled down the window and grinned. “I’m the impressionable young one, like the Skywalker to your Kenobi.”
“For the last time, it’s Obi-Wan Kenobi!” Junior shouted back at him.
Breaker paused and then grinned. “These things, I forget, Master Yoda.”

This book had me feeling all the emotions! I thought I was prepared to go into this book, but then all the hate hit me like a ton of bricks. Every chapter had me feeling something different. I was, crying, laughing, screaming in anger, blushing, stressing…as you can see, I felt everything! But that is the magic of books, isn’t it? Some authors know how to write a real love story, how to tug at the strings of your heart, and make you bleed. Break your soul and then mend it by showing us how strong love is. That’s RVD for you!

While we were still connected, he looked down at me, his aqua eyes flashing as he whispered, “You will always be worth it, Serena. Always.”

A fair warning, though; Brace yourself!

Blood in. No out.